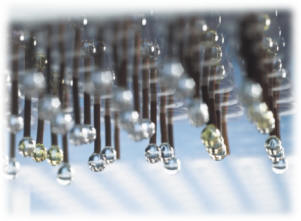 is a versatile liquid based separation technology, which works carrier free (i.e. without separation matrices like gels or stationary phases).

The Free Flow Electrophoresis System consists of two parallel plates, creating the separation chamber. The gap between these plates can be chosen by spacers. The usual gap sizes are 0.175 – 0.4 mm.

The sample and buffers are aspirated by pumps and injected into the separation chamber.

Under laminar flow, the sample is transported within a thin film of aqueous medium (proprietary ProLyte reagent).

The separated sample is collected in standard 96-well microplate format.

After the instrument is set up, the sample is applied into the flowing separation buffer 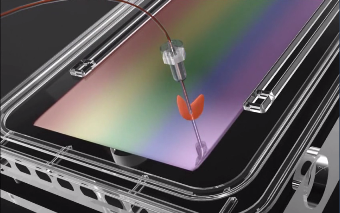 As it moves through the chamber and thus through the applied electric field, the sample is being separated either by its pI value (isoelectric focusing) or its net charge (zone electrophoresis). 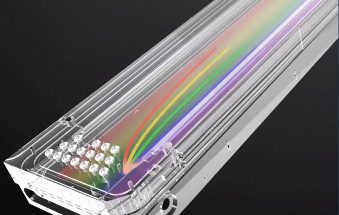 Finally, the separated sample is collected in 96 well microtiter plates 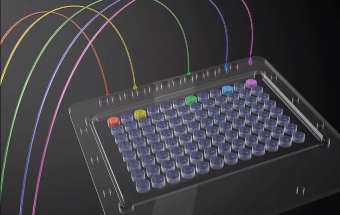 Watch a video to see the operation principle in detail:

a continuous technique for separating different molecules by differences in their isoelectric point (pI). 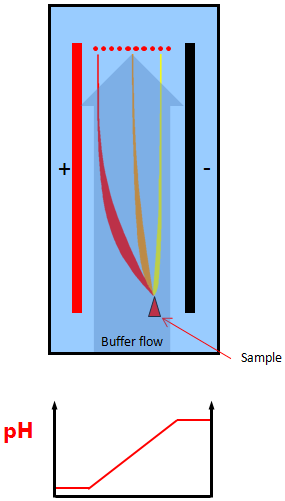 The separation buffers contain either commercial ampholytes or Prolyte reagents to form a pH gradient within the separation chamber.

The pH gradient is established when the high voltage is turned on. After the gradient is stabilized, usually within 10 – 15 minutes, the sample is applied continuously into the laminar flow of the separation buffers.

The analytes get separated as they move through the chamber and they focus at their isoelectric point.

As the pH gradient is stable over time, the amounts of sample to be separated can range from analytical to preparative quantities.

The continuous way of separation enables preparative throughput of up to 2mg/hour.

The mode of operation can also be chosen for native or denaturing separations.

Isoelectric focusing is used mainly for the separation of proteins and peptides. 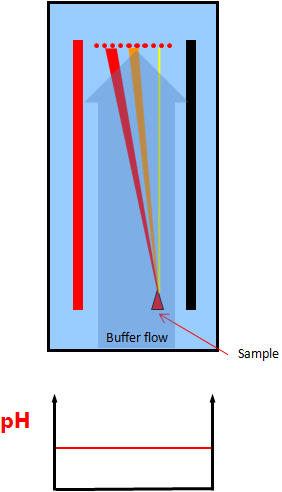 is a continuous technique for separating different molecules by their net charge.

The separation buffers have an constant pH, which can be adjusted to the needs of the analyte.

The sample is applied continuously into the laminar flow of separation buffer.

Zone electrophoresis is a non focusing technique and it is used mainly for organelle, cell and particle separation.

Zone electrophoresis is the classical approach for separating particles like cells and organelles.

is a novel high resolution separation technique for separating different molecules by their net charge. 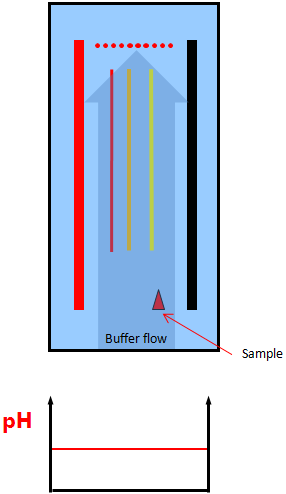 The sample is applied batch wise into the laminar flow of separation buffer and the high voltage is turned on.

Subsequently the buffer flows slowly through the separation chamber, allowing the analytes to separate.

As the sample reaches the end of the chamber the high voltage is turned off and the analytes get flushed out of the separation cell.

With the new robotic system, the whole process can be automated for the repetition of single runs.

The iZE mode is suitable for the high resolution separation of organelles and particles as well as for separating membrane proteins, protein complexes, proteins and protein isoforms.

The main benefits of iZE are:

The procedure is divided into five steps: 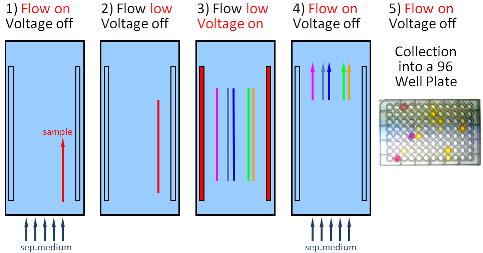 1) Sample injection, for flushing a certain amount of sample into the separation cell

2) Sample alignment, aligns the sample to the electrodes

Our latest development: pH steps in the separation media are utilised to increase band sharpening.
Analytes migrating to the electrode are passing several pH steps. Each passed pH step results in band sharpening. 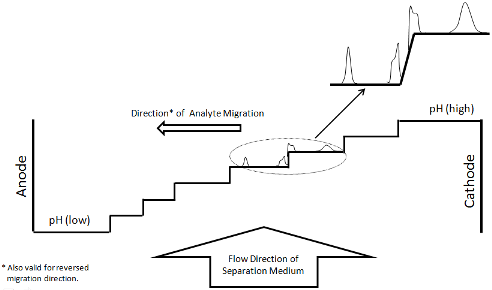 Comparison of iZE and iZE pH 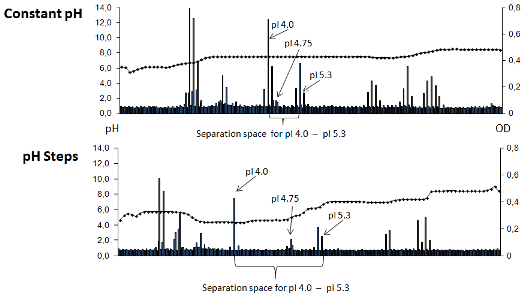 The direct comparis of iZE with constant pH and iZE with pH-steps shows a significant increase of resolution due to thge band shapening effect of the pH-steps.

In this example the pI markers (bars) pH 4.0 and 4.75, which overlap at constant pH are clearly separated apart using pH steps and the overall pattern is sharper.

The dotted line is the pH profile of the separation.

iZE pH is used for protein complex separation and cell extracts, separations are possible between 5 to 8 minutes per iZE cicle.

For questions regarding the technology or general inquiries, please send an email to support@ffeservice.com or contact us.